You are here: Home / Microsoft FAQS

Skype is great for home and work and lets you connect with millions of people to grow your business. If you want to use Skype at work, you have two options – either use the same Skype that you use at home or use Skype for Business.

The Skype that you use at home is great for smaller businesses of up to 20 employees. It is free to use, unless you want to buy credit to make calls to landlines and mobiles.

Skype for Business lets you add up to 250 people to online meetings, gives you enterprise-grade security, allows you to manage employee accounts, and is integrated into your Office apps.

Plans & Features of Skype for Business

Each person on your team needs a user account before they can sign in and access Office 365 services, such as email and Office. If you have a lot of people, you can add their accounts all at once from an Excel spreadsheet or other file saved in CSV format.

To add multiple users to Office 365

1. Download this sample spreadsheet and open it in Excel.

Your spreadsheet needs to include the same column headings as the sample one. It also needs to include values for the user name (like bob@contoso.com) and a display name (like Bob Kelly) for each user. To leave other fields blank, enter a space plus a comma in the field as shown in the following figure.

in the upper-left and choose Admin. 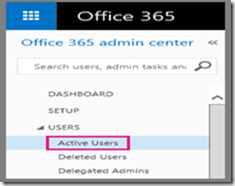 as shown in the following figure.

The Bulk add user’s wizard appears and steps you through adding a group of users to Office 365.

6. In Step 1 – Select a CSV file, specify your own spreadsheet as shown in the following figure.

7. In Step 2 – Verification, the wizard tells you whether the content in the spreadsheet is formatted correctly.

2. The assign licenses page tells you how many licenses are available.

Go to Billing in the Office 365 admin portal. After buying more licenses, you’ll have to wait a few minutes for the order to be processed and then start the Bulk add users wizard from the beginning.

If you don’t buy more licenses, accounts won’t be created for everyone listed in your spreadsheet.

In this example, we don’t buy any more licenses and continue with the Bulk add users wizard.

3. In Step 5 – Send Results, type the email addresses of the people who you want to get an email that lists all of the Office 365 user names and temporary passwords for the people in the spreadsheet.

The following email is sent to all the email addresses you specified in Step 5 – Send results. This email indicates which accounts were created. Notice that accounts weren’t created for some people because there weren’t enough licenses. 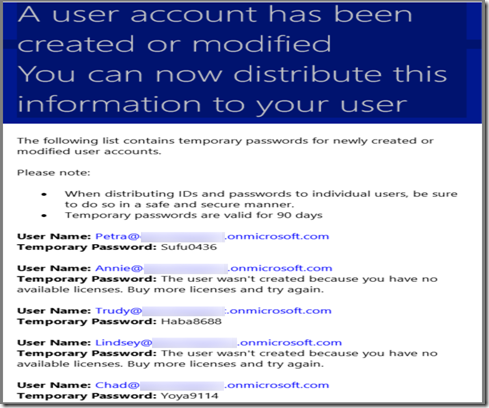 4. The final page in the Bulk add users wizard lists the user names and temporary passwords, as shown in the following figure.

In addition to getting the latest version of Office as part of your subscription, you will also get automatic updates, so your Office will always be up to date. Compare plans.

“Office 365” refers to subscription plans that include access to Office applications plus other productivity services that are enabled over the Internet (cloud services), such as Skype for Business web conferencing and Exchange Online hosted email for business, and additional online storage with OneDrive and Skype world minutes for home.

Many Office 365 plans also include the desktop version of the latest Office applications, which users can install across multiple computers and devices. The Office 365 plans that are online-only are a great choice for certain business needs, and they are compatible with desktop versions of the latest version of Office, Office 2010, Office 2007 (with slightly limited functionality), Office 2011 for Mac, and Office 2008 for Mac.

All Office 365 plans are paid for on a subscription basis, monthly or annually.

“Microsoft Office” is the name we still use for our familiar productivity software. Office suites have traditionally included applications such as Word, Excel, PowerPoint, and Outlook. All the new Office suites (for example, Office Standard 2013) include the latest versions of these applications. These suites can be installed on only one PC and do not come with any cloud-based services included in Office 365.

Both Office Professional Plus 2013 and Office 365 ProPlus deliver the same application experiences. However, Office Professional Plus 2013 is a traditional Office installation that is tied to the computers it is installed on, and it is available through volume licensing only. A user-based service, Office 365 ProPlus is available as a subscription.

Office 365 ProPlus is one of the subscription service plans in the new Office. It is productivity software (including Word, PowerPoint, Excel, Outlook, OneNote, Publisher, Access, Skype for Business) that is installed on your desktop or laptop computer. Office 365 ProPlus is a user-based service that allows people to access Office experiences on up to 5 PCs or Macs and on their mobile devices. Traditional Office installations were tied to the computers they were installed on. Office 365 ProPlus enables flexible new deployment options that IT and/or individual users can choose from to install Office.